I’m calling my ePaper (eInk) watch “done” (click on the image for a full resolution): 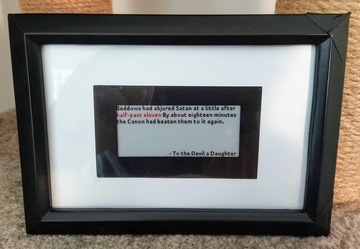 It uses a database of literary quotes to display what time it is, highlighting the quote in red.

This project originally started as a wrist watch with battery management and a custom PCB: 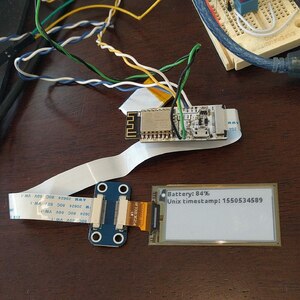 The wrist watch version was too ambitious and too distracting, so I gave up and just left it as a wall-clock. Originally I took inspiration from this clock that used a kindle, but wanted more control over the hardware.

It isn’t the most accurate or easy to read clock, but it is interesting and looks nice when it has a good quote on it.

The tri-color epaper requires two refresh cycles, one to clear the screen and put down black, then a second pass for the red. See Ben Krasnow’s (Applied Science) notes on these epaper displays for some interesting low-level technical details on how they work.