My epaper-watch is an attempt to build a watch with an epaper display.

It tells time by displaying a quote from a book:

The dataset with all the quotes needs some data cleaning love though.

The CSV has over 1,400 quotes in it. For every minute, there may be multiple quotes (“Midnight” has 26 unique quotes). Some minutes of the day do not have any quotes.

As much as possible I used tools to programmatically clean this data and used git diff to check the output at each step.

The original database of quotes comes from quotes collected by The Guardian for an art installation.

I used an annotated version from of that database built by Jaap Meijers for a Kindle-based version of this clock.

To fit on my tiny epaper display, I had to clean up the dataset.

Vim macros help me manually clean up the zoo of quotation marks and strip out all the extra ones. Given the limited number of characters I can display on the watch face, I don’t think there is any need to put quotes around the quote itself, just print the thing:

Many quotes are used multiple times for multiple minutes, so it isn’t safe to blindly remove any quote that is used more than once.

I couldn’t think of a programmatic way of reducing the length of the quote to less than 180 characters.

This step was mostly manual work, tool-assisted by having the code generation python script raise an exception if it parsed a quote longer than 180 chars:

I tried to keep the time string located somewhere in the middle of the quote, with context around it. I took some artistic license in shortening the quotes and replacing the missing text with ....

I didn’t bother updating the epaper library to support Unicode characters on custom fonts. That would be a nice addition someday.

Till then I used sed to replace non-ascii characters en-masse with a script.

Many of the quotes in the quote database do not have any indication that they are specific to AM or PM. For example:

There is no particular reason this quote couldn’t also work for 03:23 as well.

This procedure is fuzzy, and I required jupyter notebook to accomplish it.

The end result allowed me to add 480 more quotes:

In other words, out of the 1440 unique minutes of the day, before duplicating ambiguous AM/PM quotes, I only had quotes for 895 of those minute slots, and now I have 999 minutes out of those 1440 unique slots. Now there are only 441 minutes were I do not have a quote.

If there are 441 missing slots, then how inaccurate is this watch?

Using the same notebook, we can iterate through the minutes of the day, and find the longest gap between quotes.

But what about the histogram?

If I’ve done the math right: 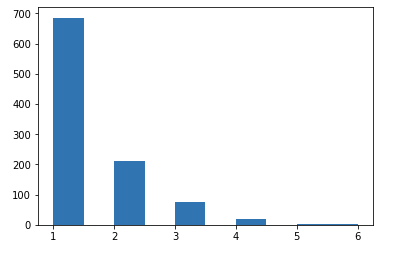 Not the most accurate time-piece?