This is my Sunjar (code). Inspired by those (expensive) light alarm clocks, my Sunjar gently wakes me up in the morning to this (click to see a youtube version):

And then fall asleep to flames:

This is my alarm clock, so I can put in the features that I want:

If you would like to see a fancier light alarm clock with a web interface to set custom alarms, check out this soothing alarm clock.

The Sunjar is just a heavily frosted mason jar and it has a stainless steal rim. By connecting this rim to particular pins on the microcontroller, I can use the rim as a capacitive touch sensor, detecting when humans touch the jar.

The electrical schematic for this is extremely simple, requiring only two pins and a resistor: 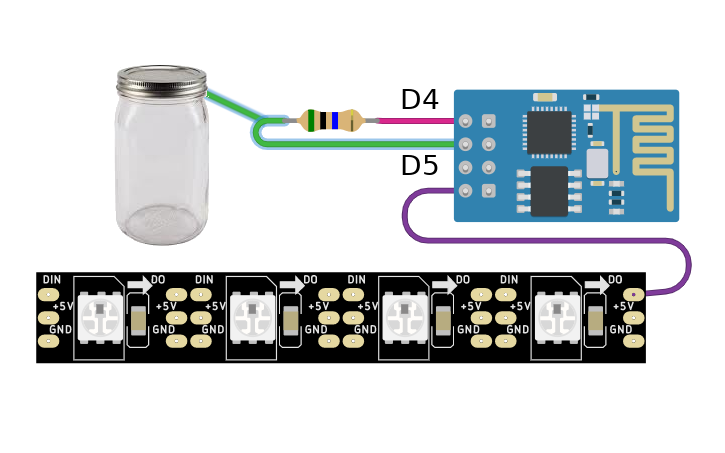 My code easy to write thanks to a library that handles the hard parts.

This touch sensor serves to override the lamp, for when I want to sleep early, use it as a night light, or need to snooze in the morning.

A Love Letter to “Pacifica”, the ocean pattern

Written by Mark Kriegsman for the art piece “Beneath These Waves Lies Light", it still looks beautiful on 5 leds:

Its beauty comes from its complexity and depth. There are four simultaneous “waves” intersecting each other with extra effects for darker hues and whitecaps.