The Sparkfun Autonomous Vehicle Competition (AVC) was a smash! You can watch some footage of the event at Sparkfun’s Ustream page.

Here is what the starting / finishing line looked like: 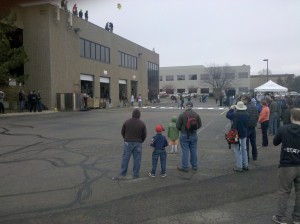 And some judges on the roof watching to make sure the Flying robots do not cut corners. 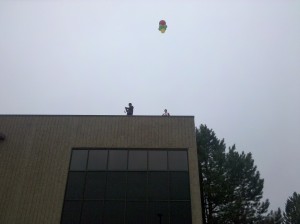 I was very impressed by the UAVs (unmanned aerial vehicles). Most of them were able to complete the course in record time. Some were even able to land autonomosouly!

Sorry for the 3gp format, it is native to the Droid. I wasn’t satisfied with the outcome of a transcode from ffmpeg or gstreamer. If someone wants to transcode for me, I would be happy to re-upload.

I was unimpressed with the ground vehicles. Only a few were able to complete the course. (Just four turns around the Sparkfun building) Most couldn’t make it past the first turn. Did they simply not test them? Was it the new environment? I wasn’t able to tell.

For sparkfun, having a three-piece band to play during the heats was a big win! They certainly kept the audience entertained, and by the time the 3rd heat came around, every team had their very own made-up-silly-them-song. I suppose it would be the equivalent of the organ player at a baseball game, but on steroids.

I hope to enter and win the next years competition!