AWS likes to use the pharse “undifferentiated heavy lifting” to describe what AWS does best: all the things that everyone hast to do anyway with computers. Commonly these are things like running servers for you, hosting files, and managing a network. Let AWS handle the boring things so that you can focus on what matters most for your business. Sounds great! I certainly do not want a job that could otherwise be commonditized and turned into an API.

In the world of “Cloud” providers, who’s mission is to provide “undifferentiated heavy lifting” for other companies, is there even room for infrastructure teams to provide value to their organizations? Or are they just barriers to the onramp that is the Cloud-computing-dream?

Some firmly believe the answer is unequivocally “No.” They believe that developers should be given an AWS account and then let loose, given all the freedom, flexibility, and power to do their thing. Some believe that any “wrapper” or “abstraction” or “glue” on top of AWS is a type of gatekeeping, a relic of old types of beliefs that no longer apply in the new DevOps world.

Others believe that companies need a “platform team” to build abstractions on top of cloud providers. Examples of company platforms include Target’s TAP and Atlassian’s Micros.

Where do infra teams fit in? Should they be the gatekeepers to all things AWS or metal? Should they re-invent all of AWS’s wheels? Should they be handing out root access to developers? Should developers even need root access? Where should the line be drawn when it comes to giving developers the “power of the cloud” and giving them an abstraction layer? A more famous engineer says that building internal PaaS’s is an Anti-pattern, but maybe there is a more nuanced answer.

Start By Drawing A Line

When The Line is “null”

At first, with no infra team, the line is all the way towards the raw resources. Developers are given an AWS account, a budget and the docs. In AWS developers might use Code Deploy or Beanstalk to get their code out. Great! Sometimes this is called “NoOps”, because there is no “operations” or infrastructure teams at all, it is just developers living blissfully in the cloud with no restraints :).

If there is only one development team, and one application, this is a great way to start. No need to setup Kubernetes (k8s), microservices, or install a service mesh. Even if there is only one person on the team who setup these AWS resources, that can be fine, because there isn’t much else to do? Until there is.

When One Team Grows Into Two

Certainly at this stage, it doesn’t “feel” like one team is trying to isolate, hide, or gatekeep them from the underlying infrastructure, right?

With Ten development teams doing their thing, it will become pretty clear that there is shared code or infrastructure components that are now powering your business. Things are spreading and diverging. Maybe one team wants to try out k8s and these new “containers” that everyone keeps talking about. Maybe one team has found “Spinnaker” for doing pipelines and thinks the other nine teams should try it.

As a organization, you are ready to make a call: Should we let the ten teams just do their thing and let things evolve organically, or should there be a dedicated team that is just in charge of building and maintaining the shared stuff?

I don’t think I need to make the case that, at a certain scale, some sort of shared-infrastructure-core-compute-platform-devops team is worth it. Infrastructure at scale is complex, and expertise in infra can be a tide that raises all boats. But how do you prevent that tide from drowning your other teams, or even worse, holding them back from the “sunken treasures” that are the native cloud technologies? Where do you draw that infrastructure line boundary?

Push That Line Where It Makes The Biggest Impact

As with most things, the answer is nuanced. Where the line is drawn between raw resources and your users will depend on your business, and how much you stand to gain by building abstractions.

The trick is this:

With each abstraction you build, ensure that the users of that abstraction are empowerd to build bigger things on top of it, and not held back by it.

For example, let’s say you built a Terraform module that abstracts away the fact that you deploy to an east and west EC2 region. Is that module empowering your users because now they don’t have to be concerned about which region to deploy to (because it is figured out automatically), or does it hold them back, because the design of the module limits the fields they can use, which limits their ability to “beak out” of the module?

Example 2: Your “devops team” builds and supports tooling to do deploys via Ansible using custom playbooks. Is that set of tooling empowering your dev teams by providing a safe experience when deploying, providing for rollbacks, hitless deploys, and standardized tooling? Or is it holding teams back, because the tool isn’t actually very good and doesn’t deploy things in a way that is conducive to the actual type of application the devs are using? 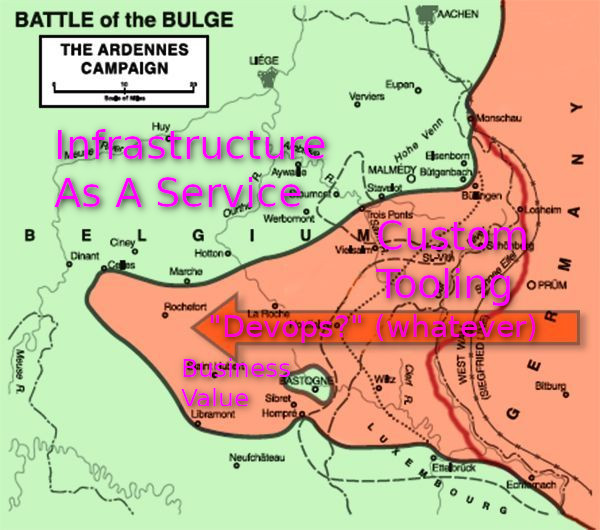 They do this by boiling away the unnecessary parts of “the cloud” till all that is left is exactly what developers need, “getting out of the way” of the business.

At the same time, infrastructure teams need to always be sure that they are not unintentionally preventing developers from doing their jobs through restrictive and crappy tooling.